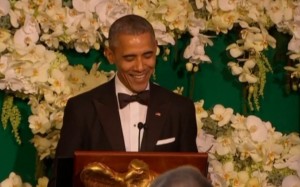 March 10, 2016, Included as part of President Barack Obama’s remarks at the White House dinner last evening was a shout out to the warm welcome offered by Cape Breton Island to American residents considering purchasing a home and moving to the island if Donald Trump were to be elected as President.

He also joked that it they greatly appreciated the residents and good neighbors of Canada for rejecting any ideas about building a wall along their shared border between British Columbia and New Brunswick.  View Video Of President Obama’s Remarks

After an initial AP news report on Thursday that Bermuda had been successful in its bid to host the America’s Cup, some questions still remained.

Emirates Team New Zealand had not received word of the decision. They were expecting the decision to be announced at a Dec press conference in New York.

Following a day of uncertainty it appears the decision has now been confirmed by an official involved with the San Diego bid.

Reports, photos and updates are presently coming in from Bernews on the impact of Hurricane Gonzalos and its hit on Bermuda.

They advise that Police have reported no loss of life and that initial reports from the hospital indicate some storm related injuries but none that were critical.  Images can be viewed of the causeway, Belco beginning to repair the electrical grid as well as general storm related damage on its Facebook page.

On its Bernews Website they report that Premier Michael Dunkley has characterized the storm’s impact as “Bermuda is bruised but Unbowed”.

These updates will hopefully provide some comfort to those from away, living off island or to friends with friends in Bermuda.

For those of you with an interest in following Hurricane Gonzalo and its impacts on Bermuda, we’ve connected to a few of the videos posted on Bermuda Meme.

As more information comes in on the storm and its results, we’ll add new post for post-storm information.

The Power of Hurricane Gonzalo: