This spectacular island has a history and culture that is well worth exploring. There are a large number of places of historical interest like museums and colonial architecture, as well as the first hospital, sugar mill and Catholic Church in this part of the world. But the Dominican Republic offers much more than just the standard Caribbean attractions of sun, sand and surf.

This is terrific opportunity to own a property in the Dominican Republic. A listing by Jocelyn Hernandez with Punta Cana Life

The national currency is the peso, but businesses prefer payments in U.S. Dollars. Exchange as little as possible before you arrive or do so at the airports, as exchange bureaus in the Dominican Republic

will give you a better exchange rate. VISA and MasterCard are accepted at most establishments and American Express less commonly.   There are government-levied charges of 5% on hotel rooms and 8% on food and drinks. Restaurants generally also add a 10% service charge. Generally, you should consider a 5 to 10 % tip, especially if you get good service.

The Dominican Republic is a developing country, dependent on agriculture, trade and service industries like tourism. The service sector has only recently managed to overtake agriculture as the leading employer in the country. Tourism alone accounts for more than $1 billion in earnings, annually and free trade zone earnings and tourism are the fastest-growing export sectors.

In December 1996, President Leonel Fernández introduced a bold and controversial reform package for the economy and it has grown vigorously since then, along with Dominican Republic real estate investment opportunities. The government is also increasing the total capacity for electricity generation, which is a key factor in economic growth. The Caribbean Island nation is open to foreign investment and there are many Caribbean real estate opportunities available, from vacation homes to commercial premises and permanent homes.

Real estate in the Dominican Republic involves low risk transactions and there are no restrictions for foreigners on purchase of real estate. The right to own private property is guaranteed and recognized for every individual or corporation, national or foreign.   If you want to experience a mix of diverse culture, a plethora of activities and prime Caribbean real estate investment opportunities, all in the second largest Caribbean island, you can’t afford to skip visiting the Dominican Republic.

Sports, souvenir shopping, national parks and gambling, combined with the spectacular beaches, make the caribbean island of the Dominican Republic one of the most popular holiday destinations in the world, and a Caribbean real estate favorite.

Outdoor activities like golf, snorkeling, windsurfing, kite boarding and boating are abundant, for the adventure seeker. The two-dozen national parks, hiking and bird watching opportunities are perfect for the nature lover.

Indoor activities like gambling and dancing are very entertaining, while shopping for local curios like carnival masks, amber or the liquid cure-all called Mamajuana is a good way to spend some time and money.   Golf courses designed by Pete Dye, Jack Nicklaus and Arnold Palmer and the perfect weather makes the Caribbean Island of the Dominican Republic a major destination for golf lovers.

With 1,000 miles of fine sand and tropical warm, clear blue waters, it is a perfect destination for just rejuvenating and relaxing. Slot machines and table games are available, including blackjack, craps, poker and roulette.   Dominican Republic cuisine is lightly spiced, imbued with coconut and reflects native Antillean and Creole recipes. Native cuisine is delicious and a subtle blend of the Native-Indian style. A popular Dominican dish is the Sancocho. There is also a wide range of eating options, from luxury restaurants with international menus to fast-food places and trailer diners. Culinary specialties vary from region to region and a number of Asian, British, Caribbean, Chinese, French, Italian, Mediterranean and Mexican and Spanish options are available. There is a vibrant nightlife, with crowded dance floors in flashy nightclubs. 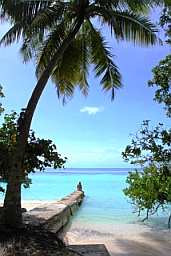 Climate  The Dominican Republic has a tropical maritime climate round the year. Sea breezes refresh the temperatures to an average of 23°C in the morning and about 32°C at noon. The mountain areas near Constanza are known to have temperatures as low as 0°C, while the frontier and Haiti sometimes witness 39°C in the summer.

The Dominican Republic’s climate is sometimes called ‘endless summer’ because of the warm and sunny conditions all year round.   The months from May to November are wet. Although torrential downpours can occur, the majority rain occurs in short bursts. Showers are short-lived and the sun comes out shining brightly in about half an hour.  The hurricane season lasts from June through to November, with August-September being the peak months.

Location and Travel   The Caribbean Island of the Dominican Republic lays at the border of the tropical zone. The island occupies the eastern two-thirds of the island of Hispaniola, with an area of 48,482 square kilometers. Haiti makes up the western one-third. The island of Hispaniola is exactly in the center of the Caribbean Islands. The Turks and Caicos and the Bahamas are to the north of it, while the Caribbean islands of Cuba and Jamaica are to the west. Puerto Rico and the Leeward Islands are to the east, while South America is to its south. The north coast abuts the Atlantic Ocean and on the south is the Caribbean Sea.

The cheapest and most frequent flights from the U.S. depart from Miami and New York. There are no non-stop flights from the UK and a lot of British and Irish visitors choose to charter flights. Visitors from England can also fly via the United States or make stops in Europe. Visitors from Australia and New Zealand have to travel to the U.S. or to Europe and then take the onward connections from there.

Tourist taxis are easily available, but their prices are close to double that of vintage city taxis. There are ‘carro conchos’ in the large cities, which are like buses on the main streets. They are inexpensive, only a few pesos and are perfect for short rides along one street. Known as ‘moto conchos’, motorcycle taxis are quite common, except in downtown Santo Domingo. The buses are cheap, safe and a lot more fun. Intercity buses work by reservation and some even offer express or air-conditioned service. Local buses, called guaguas, are good to take you to the next town and cost a dollar. Major car rental companies, such as Honda, Avis, Hertz and Europcar are available as well. You can rent a car for up to 90 days if you have a valid driver’s license and a major credit card. Driving in the Dominican Republic is on the right.

Culture and History  The Taino Indians were the first settlers and still have a presence here. The country has been under the domination of many external powers, from Spain to France and the United States. Columbus discovered the Caribbean Island of the Dominican Republic on his first voyage to the New World in 1492. He called it La Española or Hispaniola.

The capital city of Santo Domingo was founded in 1496 and is by far the oldest European settlement in not only the Caribbean, but in all of the Western Hemisphere. It is credited with having the first Catholic Church, the first hospital and the first university in the New World. It was ceded to France in 1795, by Spain and conquered by the Haitian blacks in 1801. In 1808, the populace revolted and recaptured Santo Domingo within the year, creating the first republic on the island. Spain regained title in 1814, but Spanish rule was overthrown in 1821. In 1822, The Haitians conquered it again. In 1844, the Dominican Republic was established, led by Juan Pablo Duarte.

The Caribbean Island was a province of Spain from 1861 to 1865.   In 1962, Juan Bosch became the first democratically elected president in forty years. In 1963, there was a military coup ousting Bosch and creating a civilian government. Leftists soon rebelled and the U.S. sent in troops to curb the unrest. The troops withdrew in 1966, after right-wing Joaquin Balaguer won free elections against Bosch. In 1996, Leonel Fernández secured a majority of the votes and became president.

The charm of this Caribbean Island is in its music, food and various national pastimes. It is well known for its winter baseball and handcrafted cigars, as well as its annual music festivals. The culture of the Dominican Republic is a very colorful expression of national life. Museums and archeological sites bring the history of the Dominican Republic alive for visitors, with their antique treasures and dazzling jewels.