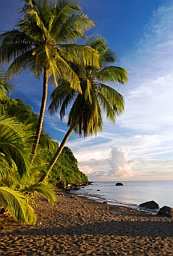 At Home in Dominica   A Caribbean island with lush forests, peaks rising to 5,000 feet, underwater craters of dormant and extinct volcanoes and dramatic vertical cliffs – both above and below the water – Dominica is a nature lover’s paradise. The National Forestry Division of the Caribbean island nation has spent more than 50 years in preserving the island’s natural beauty and creating national forests, marine reserves and parks. The name Dominica means ‘Sunday’ in Latin, which was the day, in 1493, when Columbus first came to the island. With more per capita national reserves than any other country in the world, Dominica is famous for its ecotourism opportunities. Its unspoiled beauty, rich history, sparse crowds and good quality hotels have made it the perfect place for nature lovers, honeymooners and adventure film shoots.

The Dominican economy is based on tourism and agriculture. The other industries include making soap, furniture, cement blocks and shoes. One of the biggest mainstays of the Dominican economy is the offshore medical school called Ross University, which is in the town of Portsmouth – it has more than 1,000 foreign students, mainly from the U.S. and Canada that study here.

The Caribbean island of Dominica has a high poverty rate and high unemployment, along with a low per capita GDP, which is around U.S. $5,400. Unlike most other Caribbean destinations, Dominica has an undeveloped tourism industry. It does not have famous chains of hotels or tourist spots. The absence of a large international airport and the typical, idyllic sandy beaches limit tourism. But the untouched landscape is now attracting those who look for ecotourism experiences. Although neither existing airport is big enough for the regular airplanes, Melville Hall is being expanded. As of now, there are no night flights, since the airports are not equipped with lights.

The Dominican currency is the Eastern Caribbean Dollar, at the rate of exchange of 2.7169 ECD to the U.S. Dollar. The island has a fully digital telephone system – and was, in fact, the first in the world to have one. There are also companies providing landline as well as cellular services, like Cable & Wireless, Orange, AT&T and Marpin Telecom.   There are a number of local properties for sale or rent and no capital gains tax on purchase of property or sale is applicable. Property taxes are also negligible.

From beachfront property to rainforest locales, Dominica offers the widest range in Caribbean real estate, such as coastal properties with panoramic views of the sea and mountains or prime residential developments in valleys like Copthall. Dominica is becoming very popular with Retirees from North America; many of them come to the island to live out their golden years stress-free. Coupled with the unspoiled natural beauty of the island, Dominica real estate offers real value for the money.   If you are looking for an unspoiled, lush island paradise and prime Caribbean real estate investment opportunities, the island of Dominica can’t be beat.

Dominica offers a range of activities like hiking along the numerous trails that crisscross the interior mountains. There is scuba diving and snorkeling in the relatively untouched waters teaming with coral, sponge and other tropical sea life. A special attraction is whale watching in the waters off Dominica’s west coast.

Sperm whales, humpbacks and dolphins can be found in the waters from November to March. With 135 species of birds, including the endangered Sisserou and Jaco parrots found only on this Caribbean island, Dominica is a haven for bird watchers. The beaches are mostly rocky and have grey volcanic sand. The only golden sands on the island are in the north, near Portsmouth. Dominica’s Carnival is held during the traditional period before lent and lasts for a month. Its main attractions are the calypso, the road shows and two exciting days of street jump-up.

Dominica’s cuisine features local wildlife like agouti, crapaud, crayfish and manicou. The game season is closed from March through August. Island delicacies include dishes from the Creole kitchen and Continental and American fare. Food prices are generally quite reasonable. Some delicacies include ‘mountain chicken’, which is actually a large frog. The locally grown coffee is delicious. Quite a few restaurants offer their own unique blend of Caribbean and Continental ambience and serve an eclectic range of dishes. Many of the restaurants offer the added bonus of spectacular scenery and amazing sights of the island and its beauty. Dominican home-style cuisine can be quite spicy – just enough for enjoyment. There are many hash houses that sell an assortment of local snacks, such as rotis and meat pies.

Some hotel lounges stay open until 11pm, and several hotels offer live music on the weekends. One or two have dance and music shows hosted every night and live bands on weekends. There are some local discos with modern music and folklore festivals with authentic local costumes and music. There is no duty free shopping on the Caribbean island of Dominica, but there are some excellent local handicrafts worth buying, such as hats and bags made from vetiver grass and wild banana strands.

Dominica has a typical wet tropical climate with warm temperatures and heavy occasional rainfall. The heat and humidity are tempered and prevented from being extreme by steady northeast tradewinds. The steep slopes in the island’s interior also affect the temperature and winds. Temperature variation is very slight, except in the mountains, where nights can be a lot cooler.   The tradewinds bring rain year round, and June through to October is the wettest time of the year. The average annual rainfall on the Caribbean island of Dominica is among the highest in the world. Humidity is related almost directly to rainfall patterns and the highest humidity is on the windward slopes, while the lowest is in lower, rain-sheltered areas.   Despite the sometimes wet weather, the natural beauty of the island draws visitors, vacationers and Caribbean real estate investors from all over the world.

Dominica is located between the Caribbean Sea and the North Atlantic Ocean, between the French islands of Guadeloupe and Martinique. In the Eastern Caribbean, it is halfway between Puerto Rico and Trinidad and Tobago. The main airport is Melville Hall and is on the northeast part of the island, about 38 miles from Roseau. Another smaller airport is Canefield, which is just 3 miles from Roseau to the southwest.

There are direct flights to Melville Hall from some places in the U.S. From Antigua, Barbados and St. Lucia, regional carriers offer connecting flights to Melville Hall. European flights land at Barbados, St. Lucia, Martinique and Guadeloupe. There is also a ferry service to Dominica, operating regularly from these islands.   Taxis are easily available at the airports and are more reliable than the minibuses, which are part of the local public transportation and relatively inexpensive. You can also rent a car. Driving in Dominica is on the left, with a 20 mph speed limit in most towns. A local driving permit costs U.S. $12 and is valid for one month. It is available at most car rental agencies.  A current home country or international license is required for the permit, with two years of driving experience.

Camping is not allowed in the national parks and is discouraged on the rest of the island. Tipping is discretionary, and most hotels and restaurants add a 10% service charge to the bill. U.S. dollars are generally accepted, but the rate of exchange is lower than at banks. Dominicans do not like their pictures being taken, so you are expected to take their permission. Be polite, as harshness and rudeness is not appreciated. Don’t bargain in shops. Dominica is not a typical Caribbean island vacation destination, so don’t expect a big chain of luxury hotels or wild and wooly nightlife.   Dress casual and conservative. Men should wear a shirt whenever they are not on the beach.

A Catholic country, the Caribbean island of Dominica does not allow nudity in public places, so wear suitable swimming clothes and avoid wearing skimpy bikinis or wandering around town in swim clothes.   Dominica Climate   Dominica has a typical wet tropical climate with warm temperatures and heavy occasional rainfall. The heat and humidity are tempered and prevented from being extreme by steady northeast tradewinds. The steep slopes in the island’s interior also affect the temperature and winds. Temperature variation is very slight, except in the mountains, where nights can be a lot cooler.

The tradewinds bring rain year round, and June through to October is the wettest time of the year. The average annual rainfall on the Caribbean island of Dominica is among the highest in the world. Humidity is related almost directly to rainfall patterns and the highest humidity is on the windward slopes, while the lowest is in lower, rain-sheltered areas.   Despite the sometimes wet weather, the natural beauty of the island draws visitors, vacationers and Caribbean real estate investors from all over the world.

The Carib tribes replaced the original Arawak inhabitants of Dominica around the 14th century. Christopher Columbus arrived in 1493, but soon left with his crew after being defeated by the Caribs. In 1627, England tried to capture the Caribbean island of Dominica, but failed; in 1635 France laid claim to the island. French missionaries, however, were also unable to gain control of the island from the Caribs and abandoned it in 1660.

The possession of Dominica was formally ceded to the United Kingdom in 1763 and a government was set up, making this Caribbean island a British colony in 1805. The emancipation of slaves occurred in all parts of the British Empire in 1834. By 1838, this island became the first British Caribbean colony with a Black-controlled legislature. The United Kingdom established renewed control of the Dominican government in 1896, making it a crown colony. From 1958 to 1962, it was a province of the West Indies Federation and finally became an independent nation in 1978.

Dominicans are descendents from and are comprised of a wide range of peoples, from Carib tribes to French and British settlers, as well as slaves from Africa. The last remaining tribe of the Caribs in the entire region is on this Caribbean island and lives on a 3,700 acre reserved territory on the east coast. This mix of cultures makes Dominica an amazing place. Although English is the official language, the majority of people speak either a French-based patois Creole or Cocoy, which is a mix of the cockney English of the English settlers, mixed with an infusion of African tongues brought by the slaves.

Motto”Après Bondie, C’est La Ter”
(After God is the Earth)

Parliamentary Democracy
Independent from the United Kingdom since 3rd November, 1978